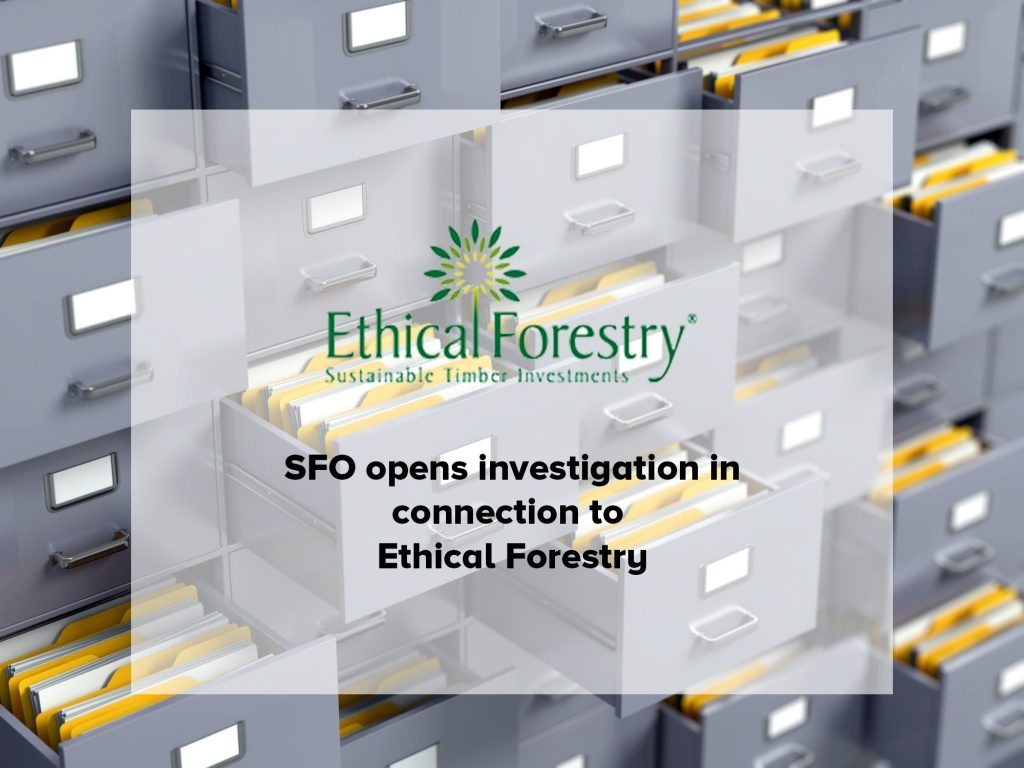 On the 8th of March 2017, the Serious Fraud Office announced an open criminal investigation with connection to Ethical Forestry Limited and its associated companies following allegations involving a “fraudulent investment scheme”.

The short SFO statement on their website states that the allegations date between 2007 and 2015, and the investigation will be conducted in conjunction with Dorset Police who executed warrants in Poole, Ferndown and Boscombe, not far from where the UK arm of Ethical Forestry was based, in Bournemouth.

It was reported separately that at least one of the raids, in Ferndown, involved armed police.

Investors can be advised that the SFO will be releasing a questionnaire to be completed from the 10th of March, available from https://sfovla.egressforms.com, which it also said is secure, protecting investor’s information.

At this time, this is all the SFO seems to have publicly released, as it is not their standard practice to comment on ongoing investigations.

Ethical Forestry was registered in Bournemouth back in 2007 and later went into liquidation in December 2015, preceded by a shock-article in the Bournemouth Echo when some members of staff were told they would be redundant by Christmas.

Since then, HJS Solutions have been appointed as liquidators, with most communication with investors going through Shane Biddlecombe. Options with a “preferred buyer” have been ongoing for some time.

In March 2016, it was revealed that 3 bosses at Ethical Forestry took a total of £20million in pay between 2011 and the date of liquidation.

In November 2016, Hurricane Otto made landfall in Costa Rica, causing widespread devastation to the country, with damage reports distributed by HJS in 2017 telling investors that at least 2 of the plantations had suffered severe to total damage, with low to moderate damage to others.

This brings us roughly up to date, with the SFO investigation looking into the underlying investment marketed by Ethical Forestry Limited and associated companies

Our own firm, Get Claims Advice have been a contact point for many investors in Ethical Forestry since it’s 2015 liquidation, in part due to the way in which it was sometimes sold, often through a SIPP (Self-Invested Personal Pension).

In some cases, Ethical Forestry (itself a high-risk and unregulated investment) was sold to retail clients, who do not fit the descriptions of High-Net Worth individuals earning over £100k, or Sophisticated Investors needed for an adviser to deem the investment a suitable choice.

Since July 2016, some of our clients have begun to see compensation payouts from claims we have facilitated on their behalf against the negligent advice of their financial adviser.